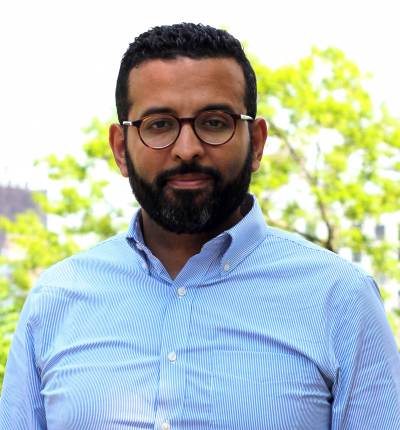 Along with teaching three courses for the academic year, he will also take part in scholarly events and activities, conduct research and work on his publication portfolio.

“Ben Hammed brings his thorough knowledge of Arabic literature and thought to Duke," says Shai Ginsburg, chair and associate professor of the department.

"He has deep familiarity with North African cultures – an area in which AMES faculty are less proficient – and his research juxtaposes Muslim and European thinkers to explore modern Arabic literature. It is simply fascinating.”

Ginsburg believes Ben Hammed’s work will serve as a linchpin between the interest in Sufi thought and the impact of contemporary thought, Marxism in particular, on Arabic thought.

Ben Hammed, who hails from Zaghwan, Tunisia, holds a Ph.D. in Middle Eastern, South Asian and African studies, and a graduate certificate from the Institute of Comparative Literature and Society at Columbia University.

What will be the focus of your research at Duke?

I will continue to revise my dissertation “Contesting the Empty Time of Modernity: Sufi Temporalities in Postcolonial Arab Thought and Literature,” which explores how contemporary Arab thinkers and creative writers engage with the legacy of philosophical Sufism and its concepts of time.

In the dissertation, I debate the position of modernist thinkers and poets who critique this tradition as the arch example of timeless Islamic thought.

In addition, I analyze the alternative propositions of Marxist and ethicist intellectuals who draw on the notion of event-time in Sufism to theorize lines of flight from dominant constructions of self and of history in capitalist modernity.

By the beginning of fall 2023, I hope to submit a book proposal to publishers.

What brought you to your research?

Early on in my graduate studies, I was drawn to the questions of time and temporality in Arabic poetry and the Arabic novel.

The writers that I researched, such as the Syrian poet Adonis and the Egyptian novelist Gamal al-Ghitani, were not only experimenting with global modernist forms of achronological thinking but were also engaging with pre-modern Islamic concepts of time.

I became interested in exploring classical Islamic reflections on time that can be found in historical chronicles, studies of Arabic grammar and philology and texts of Islamic philosophy and Sufism.

This interest oriented me to a broader project examining how Arab writers, psychoanalytical and structuralist thinkers, as well as Marxist and Islamic intellectuals wrestle with the question of conceptualizing time in Islamic culture and its significance in modernity.

What are you looking forward to during your time at Duke?

I look forward to teaching classes on Arabic literature and culture and interacting with colleagues in both Duke and UNC’s Middle Eastern studies programs. I’m also excited to explore all that the Research Triangle has to offer — and look forward to the year-long warmth in Duke’s botanical garden and local parks.

Why did you choose Duke?

Duke is a world-renowned research institution, and its Asian and Middle Eastern Studies department is truly impressive. AMES will be wonderful resources as I develop my research and pedagogy.